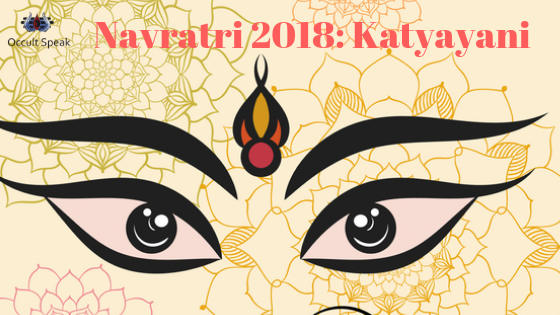 Katyayani Mata is the 6th Divine form of Goddess Durga. The Sixth Day of Shardiya Navratri is considered as Shasthi

The deity of this day is known as Katyayani.

READ: Get bless with Oratory and Writing Skill

Katyayani word derived from Katyayan Rishi who was a father of Katyayani Mata.

It is said that once Rishi Katyayan started penance ( Tapa ) of Maa Durga as the couple were childless for many years. Hence after many years of penance Goddess Durga get reveal herself to Katyayan Rishi – in divine  ( Darshana).

Rishi Katyayan was asked by Goddess Durga – What is his wish?  On this Katyayan ask for a boon to bless him and his wife with child.

READ :  Explore and polish your creativity by worshipping Kushmanda

Being happy with Rishi Tapa, Goddess Durga blesses couple that she itself will be born in their home in form of Devi Katyayan hence the baby received the divine name of her father as Katyayan.

Katyayani is depicted with 4 hands holding  Kamal ( Lotus Flower )  in upper left hand and lower left hand in holding Khadga ( Sword).On upper and lower right side she is having Abhaya mudra. She is shown riding on LION as her vehicle.

READ : Get bless with divine beauty and grace in Navratri

She is associated with happy married life and to bless her worshipper to get the good soul mate.

Sword – To attain sharpness of brain and attain victory over enemies

According to Devi Bhagwat Puran in Chapter 22, there is phrase mentioning about Katyayani Vrata ( fasting ) wherein Gopis of Dwapar Yuga used to worship Goddess to get bless with their husband in form of Shri Krishna.

Hence they used to went to the river bank of Yamuna and after bathing they create an idol of Devi – out of the sand of river bank and worship her to get a divine blessing.

It is said that Katayani Mata should be worship with the fresh aroma like Flower, Sandalwood.

According to Tantra and many occult experts, Goddess is worshipped to get the blaze of hypnotic power and influence the people.

Katyayani Mata like PAN with honey hence it is advisable to offer her such offering in her Pooja during Navratri. She like red colour hence offer her Red Rose also.