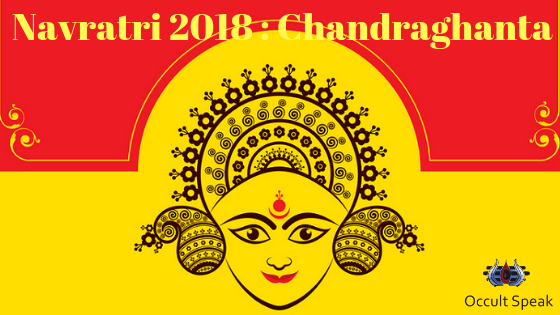 Chandraghanta is the 3rd Divine form of Goddess Durga. In Navratri 3rd day is worship to Chandraghanta.

The Third Day of Shardiya Navratri is considered as Treej.

The deity of this day is known as Chandraghanta Mata.

Chandraghanta means – Devi who has the face of Half Shaped Moon like Bell.

She is also known as Chandi, Chandika, Ranchandi as this 3rd form of Divine Manifestation of Maa Durga is better known for getting bless for gain victory over an enemy.

This Swaroopa of Durga Mata is the symbol of bravery, courage and to attain victory over the enemies.

Chandraghanta Mata has eight hands holding different Astra Shastra, riding on the Lion. She has worn white colour rosary in her neck. She has shown as third Eye ( Agya Chakra ) on her forehead – between 2 eyebrow hence that show the power and authority which govern the whole universe.

She is carrying half moon on her head hence also known as Chandraghanta Devi.

Colour –Green which represents growth and also to dimish the evil

Weapon: She is assigned with 8 arms such as

Kamal ( Lotus ) –depict Yogi/Worshipper should remain in this world Jal-kamalvat mean not indulged in 5 Vickaar and perform their karma without any expectation.

Kamandalu ( Waterpot) – The water inside utensil show the inner purity to be maintained while residing on this planet.

One hand with Abhay Mudra – Show the blessing of Durga Mata to protect from hurdles of the life.

A devotee who worships Chandraghanta Mata get bless with divine aura, protection from evil spirit and enemies.

Her complexion is golden hence devotee who worship her also get blessed with divine beauty, grace with the internal charm which also gets reflected on their face.