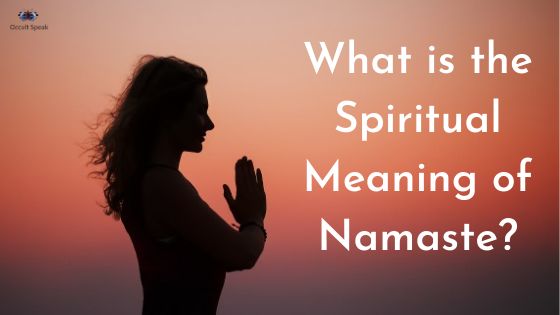 What does “Namaste” mean?

Well, we all Indians greet each other by saying namaste but have you ever thought, why we always use this phrase when we meet in any social, cultural, religious or personal life events. Whenever we join the palm together in front of our chest, we bow down our head and say the word, Namaste. This greeting is usually made for all the people ranging from children to the elders. Our Indian tradition is a vast field of culture and knowledge and it also has scientific validation for the same.

Namaste can be used in any religious function or in a casual way also but what we have understood from our Vedic Shastras is that  Namaskar is not only the greeting but it is also paying homage to the person whom we meet. It is not only the casual way of greeting, but it is also a gesture to start a conversation or an act of worship or another act of showing humbleness and ground to earth attitude. Hence we can understand that the phrase ‘Namaste’ is the way of giving respect to the person to whom we meet irrespective of age, gender or religion one belongs to.

What is the Spiritual Aspect of Namaste?

The spiritual meaning of ‘Namaste’ literally means: I bow and respect to you. It also has a spiritual meaning that the divine energy/ the law of karma or Almighty whatever you can say/see in the other human is the manifest of God and consider that the same God also resides in your heart.

Hence I respect and bow down to the divine energy with a mindset to worship the almighty/deity (here the concept is of Advait Vedant – Sava Khalu Idam Brahma – everything is Brahma – all energy are same – all humans are a manifestation of Brahma – the supreme God).

What does Occult Science say about Namaste?

Namaste is also said to be a Mudra and in occultism, there are many Mudras which are used to please a deity in their rituals. Such as Padma (lotus) and Shankh (Conch-Shell) mudras are shown to Lord Vishnu while offering him prayers and offerings.

Mantra Shastra says, if a devotee does not perform mudras, the deity does not accept this pooja/prayers. Hence we can say, ‘Namaste’ is a form of mudra, therefore we, in general also show his mudra while going to any temple and give a salutation in front of an idol.

While performing this mudra, we fold hands thereby uniting and gathering the five elements of the cosmos. We unify and maintain the balance of our mind and astral body.

According to Hindu Mantra Shastra, every letter and alphabet consists of sound energy hence we can see that the sound creates such a huge impact during any calamities, lightning, earthquakes etc and many times, a newborn child dies during such natural calamities due to the sound vibrations.

Even many sciences are based on sound vibrations only such as Numerology which is completely based on 5 elements and 9 planetary systems plus more sound energy.

Each alphabet (varna) accumulates a lot of high energy and when some other varna/alphabets get connected to form the letters/words, it creates tremendous sound energy which is known to us as ‘Mantras‘.

म – It is said to be Rudra Beej, which is the destroyer of bad energies and atmosphere, The Rudra present inside this mantra helps you to destroy internal karma ( bad thoughts ).

स – It is said Vaani Beej means the head of the voice – mean Saraswati, mean to speak in soothing effect which helps (saras) extracting the essence of life (ash) + Vati(Vedas and ultimate truth) hence whenever we speak, this greeting reminds the person in front of me is also the divine child of God and we need to respect him for his/her presence in form of a human.

त – It is Asta-Beej which are Guru, Shakti, Rama, Kama, Yog, Tejo, Shanti and Raksha. Hence whenever we speak त in Namaste (नमस्ते),  we tend to involve and activate these 8 Beeja mantras in our mind and body which allows the divinity inside us to grow and evolve our real self.

Here- Guru Beej helps to show us the righteous path, Shakti helps to perform the act, Kaama (depicts to complete the actions to end goal – results), Yog (unite our mind and body to give a proper balance of life), Shanti (to listen to internal voice) and Raksha (give the protection shield to overcome the obstacles in our life).

So, when we combine the above alphabets, we get amazing sound energies which help in erasing the negatives vibes, internal self-talk, doubts regards to others and self and gives us sweet soothing effects * due to the sound of Vani beej.

Since the ‘Vaani Beej‘ means to speak out auspicious voice, we say good vibrations sound in the form of namaste which creates a channel of positive aura, sparkle in eyes and gives good sync of mind, body and spirit due to the sound vibrations of the above-mentioned alphabets.

Let me know how you found this blog on “Why do we greet with Namaste?”

namaskarwhy do we greet namaste